Surrounded by National Forest, with only two lane, curvy roads for access has protected Highlands NC since it was founded in 1875. Samuel Hutchinson and Clinton Kelsey, a couple of Kansas developers, “took a map in hand and drew a line from New York to New Orleans and from Chicago to Savannah,”writes local historian Ran Shaffner in “Heart of the Blue Ridge: Highlands, North Carolina.” They thought that the spot where these two lines intersected would be a hub of commerce and a great population center in the southeast.

The idea of hauling goods up and down the highest mountains in the eastern United States to get them from New York to New Orleans never took off. But a landscape that hindered ordinary commerce in the 19th century uniquely qualified Highlands for the business it’s been in ever since.

Enveloped by the Nantahala National Forest, Highlands NC is located at the southern tip of the Blue Ridge Mountains at an elevation of 4,118 feet within two hours driving time of Atlanta Georgia, Asheville North Carolina and Greenville South Carolina. The surrounding mountains soar to heights over 5,000 feet and in July, our average daytime temperature is a cool 75 degrees. With its rich history, wonderful climate and enviable way of life, Highlands has been a haven for southerners anxious to escape the summer heat and is an ideal location for a summer home.

The historic Highlands Inn, where generations have rocked afternoons away on the Main Street porch, was built in 1880 and is one of several Highlands NC structures on the National Register of Historic Places. The 19th-century Episcopal Chapel nearby and the old cottage neighborhoods bear witness to the town’s rich history.

Some locals and longtime summer residents worry that Highlands’ increasing popularity will threaten the character of a place with traditions tuned to the rhythms of summers that feel more like camp. However, the town’s core attractions, walking on footpaths bordered by mountain laurel and lounging on a Main Street bench with an ice cream cone, are like the drive up the mountain. They are too connected to the place itself to be replaced by imported experiences.

Back in 1979, a small group of Highlands NC residents began to meet because they shared a concern for the history of the town. The area was changing rapidly and historic structures were disappearing. These concerned citizens formed the Highlands Historical Preservation Society, Inc., a non-profit organization, which fell into inactivity. But in 1999 it was reactivated as the Highlands Historical Society, for the same reasons it was originally formed.

By 2000 the new society had appropriately bought for its home the oldest house still standing in Highlands and by 2002 was honored by the North Carolina Society of Historians for its progress over three short years-from when it had no building to call its own, no funds in the treasury and no archives to speak of- to what it stands for today: an active society intent on preserving and promoting the deep heritage of Highlands.

The Historical Society welcomes visitors to come see old photos of the areas rich history. You may even recognize a few buildings on Main Street from the photos. It’s a lot of fun and you never cease to learn something new about our town.

Classes and Lectures are offered throughout the summer like “Wit and Wisdom Within Spittin’ Distance of Highlands,” led by Randolph Shaffner, Historical Society Archivist; and “A Walk in the Park,” where actors portray early Highlands residents in the town cemetery, with seated performance schedules. 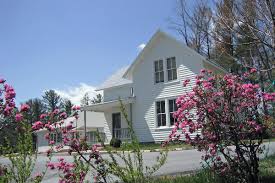 Take a trip back to the “olden days” at the Highlands Historical Society’s Historic Village located at 524 N. 4th Street. This Village tells the stories of Old Highlands as it is composed of three unique and interesting buildings each with its own folklore tale.

The House-Trapier-Wright Home, known as “The Prince House,” is the oldest existing house in Highlands. It was originally built in 1877 by millright Arthur House and now serves as a living history museum.

The Highlands Historical Museum, originally built in 1915 and constructed to house one of the oldest libraries in the state of North Carolina “The Hudson Library,” was moved to this location in 2002 and is now a state-of-the-art museum and archives.

The Bug Hill Cottage was one of 60 open-air cubicles built in 1908 for patients suffering from Tuberculosis, one of the most dreaded diseases in early 20th century America. This cottage memorializes the devoted work of Dr. Mary Lapham whose Tuberculosis Sanatorium was one of the first in North Carolina and helped to save many Highlander’s from this virulent disease.

The story goes that Colonel John A. Zachary, from Surry County in North Carolina, explored the area of Cashiers with his son in the fall of 1832. The following spring, they returned to build several cabins and became the first homesteaders in the area.

Not far behind, the James McKinney family, from Pickens, South Carolina arrived two years later and bought 600 acres. They kept cattle and horses on the mountain land through the summer and fall, then they moved the cattle and horses to South Carolina for the winter. Part of their property is now the High Hampton Inn located two miles south on Highway 107.

There have been many stories as to how Cashier’s (which is pronounced cash-ers) got it’s name but the most popular one is the story of James McKinney’s horse, a white stallion, which he had paid quite a handsome sum for so he named it ‘Cash’.

Fall was approaching and it was time to herd the horses and cattle south for the winter, Cash was nowhere to be found so they made the trip south without him. The following spring, the stallion showed up as healthy as …well a horse. Apparently he had wandered south and found a good feeding in the valley. So the McKinney’s started calling the area “Cash’s Valley”.

The Mission of the Cashiers Historical Society is to foster public appreciation of the history of Cashiers Valley and to preserve and protect the historical and cultural character of the community through its commitment to the preservation of the Zachary-Tolbert House and other historic resources.

The Cashiers Historical Society was formed in 1996 as an affiliate of the Village Conservancy, Inc. to save the Mordecai Zachary House two miles south of Cashiers on Highway 107. Owner Robert Red “Bubba” Tolbert wanted to sell the home and property only to someone who would restore and preserve it. Tolbert, did not succumb to family pressures to divide the original handmade furniture among family members, but insisted on keeping everything in tact.

Thomas and Wendy Dowden purchased the Zachary-Tolbert house in 1997, and after initial feasibility studies and fund raising, the Dowdens donated the house and adjacent property to the Cashiers Historical Society. The Society then began an extensive restoration project executed by Lupoli Construction of Highlands under the guidance of Harris Architects of Brevard. Now on the National Register, the Zachary-Tolbert House is open for tours and special events. And programs have been developed for local school children at the site. Generous members gifts and proceeds from the yearly Cashiers Designer Showhouse made this restoration possible.

In addition to the Showhouse, the Society annually sponsors three other major events. All begun in 2003: Founder’s Day, a hands-on event for 3rd and 4th grade students in the area, Cycling thru History, a bike ride circling Whiteside Mountain and the Village Heritage Award, to honor a business that has creatively adapted an older structure to preserve the character of Cashiers.

In 2004 a $15,000 grant was received from the Community Foundation of Western North Carolina through the Cashiers Community Fund to prepare a Master Plan for the Zachary-Tolbert House. It is presently being finalized with plans for a pavilion for meetings and special events, hiking trails throughout the property, additional archeological work and the kitchen renovation. Also additional land was acquired from Mr. Dowden making the grounds over 5 acres. 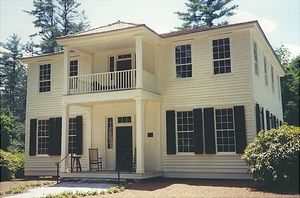 The Zachary-Tolbert House in Cashiers NC

Built 150 years ago, and virtually unaltered, the Zachary-Tolbert House is one of the most important historical buildings in Western North Carolina. A rare example of Greek Revival-style architecture, it serves as a monument to the pioneer settlers of Cashiers Valley.

No Electricity…….No Plumbing…….No Central Heat……No Paint on the Interior Walls ….and much of the Original Furniture crafted by Mordecai Zachary.

The Zacharys were among the first white settlers of Cashiers Valley, arriving in 1832 to carve a new homestead out of a mountain wilderness, previously a part of the vast Cherokee Nation of Western North Carolina. Mordecai Zachary was nine years old when his family settled in Cashiers. Among the many skills he learned from his father and older brothers was carpentry. In 1842, at the age of 19, he began clearing a tract of land bordering the Chattooga River, turning the felled trees into lumber at the family saw mill. In 1852, when the house was complete, Mordecai presented it as a wedding gift to his new bride, Elvira Keener.

Over the years, the Zachary house also became an inn for boarders as well as a summer retreat for several prominent families, including that of Confederate General Wade Hampton, III. The Zacharys sold the estate to Speaker of the House, Armistead Burt of Abbeville, S.C. Later, it was owned by two Parker family brothers and finally by the Tolberts of Abbeville and Charleston who occupied the house for most of the 20th century.

Today visitors can step into the past and delight in the artistry of the 19th century furniture, crafted by Mordecai Zachary, thought to be the largest collection of Plain Style furniture by a single maker.

The first floor includes a parlor where family and friends gathered; a dining room, complete with an original three-piece dining table; a bedroom, that includes original handcrafted bedsteads; and visitors’ center with a pictorial presentation of the extensive two-year renovation project.

Graffiti throughout the house marks such events as Charles Zachary’s first steps in 1870 and a fishing trip made by C. B. Fugate in 1871. Even such everyday events as a bath on a chilly February day are recorded on the walls – all priceless reminders of life in the 19th century.

In 1998, Tom and Wendy Dowden generously donated the building and its contents to the Cashiers Historical Society. Carefully reconstructed, the Zachary-Tolbert House opened as a public museum in 2001. The house is on the National Register of Historic Places.